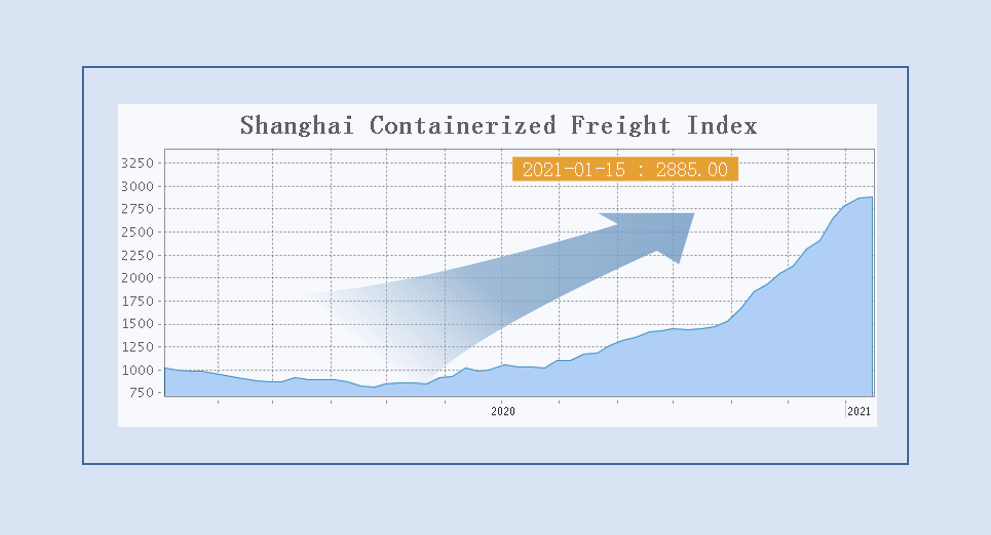 Freight rates for shipping and transporting goods are going through the roof. What happened and why do we see such an unprecedented surge in freight rates?

Freight rates for shipping containers from China to Europe and the US have gone up to the unseen levels. The Shanghai Containerized Freight Index (SCFI), which is used to measure the average spot rates from Shanghai on the major trades, increased by 3x compared to last year (or any other year for that matter). For example, freight rates from Shanghai to the US West Coast rose to a new record of $4,054 per TEU – a 20% increase!

The lockdown is a direct effect of the COVID-19 pandemic in 2020. First, it was the lockdown in China at the beginning of the year, and a couple of months later  – everywhere else in the world. The economic lockdown affected the flow of goods: due to the closure of factories and plants, bookings were canceled. This resulted in blank sailings and capacity cuts. Passenger planes stopped the delivery of the airfreight cargo, causing a surge in prices for the limited capacity of the cargo planes. 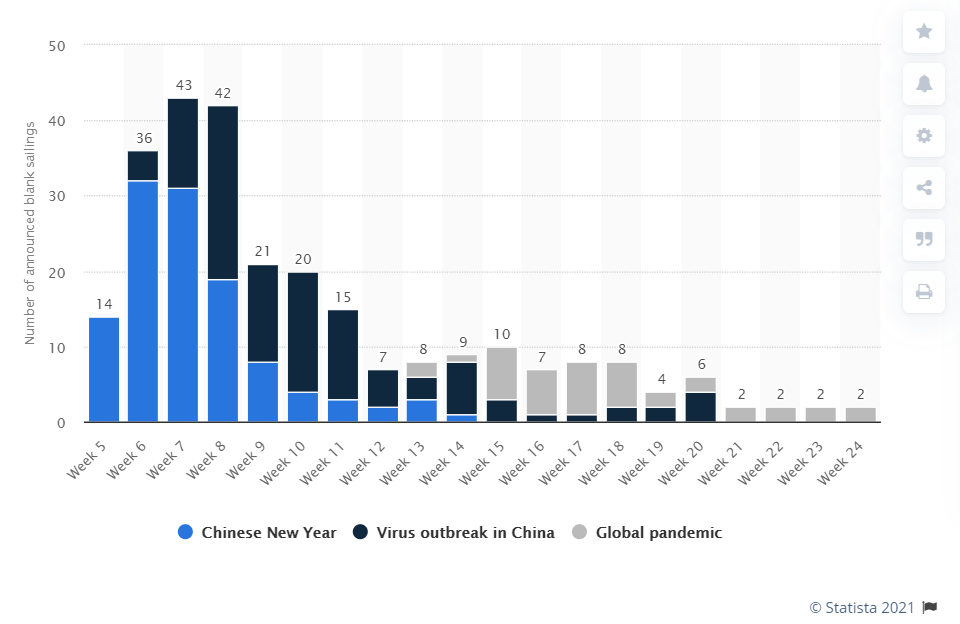 During the summer of 2020, the flow of goods continued almost “as usual“.  But then, another unexpected Corona effect kicked in – the change in consumer behavior.

As Vincent Clerc (Maersk CEO) put it: “We hadn’t foreseen just how Covid would be able to change consumer patterns,” he said, adding that acceleration in demand has been the fastest in at least 10 years. “People use a much, much higher portion of their wages on goods.”

It’s true. There is a change in the spending patterns. When the services became unavailable (restaurants, beauty, tourism, entertainment just stopped), people switched to buying more physical goods that need to be transported. Retail sales in the U.S. in December rose by 4.8% compared to the same period in 2019, causing the surge in demand.

2. The Shortage of Equipment

A conspiracy theory goes like this: all shipping lines had a secret meeting and decided to send half of their equipment to an uninhabited island far away. This theory could be false, but the truth is that there is a significant imbalance of empty containers on Asia-Europe trade.

Commitment agreements with the shipping lines used to be a space and equipment guarantee in the past, but it doesn’t solve the problem anymore. Even with commitment in place, it’s close to impossible to get an empty container in China these days. Carriers introduced a number of surcharges, pushing rates even higher. For example, Maersk Line is working on a number of initiatives called ‘Delivery Promise’ which should replace the standard ‘commitment’ agreement.

This is very frustrating to shippers. They have to accept the new rules of the game: “Ongoing service unreliability, coupled with the record profits of shipping companies at times of crisis, clearly depicts a seriously disrupted market and demonstrates that carriers have been passing tremendous hikes on spot rates, imposing heavy surcharges above the fixed-term contractual rates,” says Denis Choumert, president of the European Shippers’ Council (ESC).

COVID-19 and the equipment shortage are both valid reasons for the current freight rate spike. However, the main cause for the rate fluctuations on the market is always the supply & demand balance (or imbalance, to be precise). The lockdown contributed to increasing demand and the lack of shipping containers in Asia resulted in a limited supply. Consequently, freight rates have doubled.

Market forces are the main driving factor behind the freight rate fluctuations. Factors such as fuel prices, distance traveled, terminal costs, etc. don’t impact freight rates as much as supply and demand do.

According to the United Nations Conference on Trade and Development (UNCTAD):

“In general terms, the demand and the supply of maritime transport services interact with each other to determine freight rates. While there are countless factors affecting supply and demand, the exposure of freights rates to market forces is inevitable. Cargo volumes and demand for maritime transport services are usually the first to be hit by political, environmental and economic turmoil. Factors such as a slowdown in international trade, sanctions, natural disasters and weather events, regulatory measures and changes in fuel prices have an impact on the world economy and global demand for seaborne transport. These changes may occur quickly and have an immediate impact on demand for maritime transport services. As to the supply of maritime transport services, there is generally a tendency of overcapacity in the market, given that there are no inherent restrictions on the number of vessels that can be built and that it takes a long time from the moment a vessel order is placed to the time it is delivered, and is ready to be put in service.

Therefore, maritime transport is very cyclical and goes through periods of continuous busts and booms, with operators enjoying healthy earnings or struggling to meet their minimum operating costs.”

Shipping lines are finally in a good place, making up for the previous years of low margins. Ships are loaded with high yielding containers, the spot market is at an all-time high, and the customers are forced to accept higher rates when signing new long-term contracts.

Freight forwarders make the biggest margins on the fluctuating market, so they are in a good place, too. Although, their sales and booking teams must be under a lot of pressure now.

Importers and exporters, on the other side, have to deal with the new reality of shipping rates. Their dilemma is difficult – accept the “ridiculously high” spot rates, or wait until the market will “normalize“. But as the wise saying goes: “It’s very difficult to predict, especially the future”. Who knows, maybe these rate levels are the new normal?